I was introduced to this technique by Xavier Quesada Allue who told me he learned it from Tobias Mayer. A reference to this can also be found in Jean Tabaka’s book: Collaboration Explained (p207) entitled “Pass The Cards”

A minimum of 8 people, and an even number of people

Anything that you want to prioritise, written on separate cards

One card and one pen per person

In each round everyone finds someone to pair up with and they discuss the two cards they have in front of them: 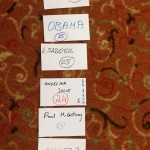